And so it begins, The greatest showcase of the sport of Lawn Bowls on the biggest stage - The XXI Commonwealth Games in Gold Coast Australia.

After a late night at the Opening Ceremony of the games and barely 5 hours sleep, we are up a raring to go on the first day of competition. We arrive at the venue at 7:30 am and once the greens are prepared by the amazing team of greenkeepers it is up to the ITO's to go out and time the 4 competition greens. All were running around the 14 second mark on this first morning. This slower pace is hardly surprising with the amount of rain that has fallen in the Gold Coast in the past weeks. Hopefully the pace will pick up if we get a run of dry weather. The pace of the rinks is measured by delivering bowls to a distance of 27 metres from the mat and timing how long that takes. Confusingly, the quicker the rink the longer it takes the bowl to reach the jack and so an 18 second green will be faster than a 14 second green.

On Thursday 5th the competition kicked off with the Men's Triples sectional play and the womens singles sectional play. My first duty at 9 am was as Umpire on green 4. There was a mix of games being played on this green including the Womens singles match between Laura Daniels of Wales and Lucy Beere of Guernsey and the Mens triples which saw England play Papua New Guinea.
The next session I was Marking on the TV rink 12. An excellent match between Colleen Piketh from South Africa against Catherine Beattie of Northern Ireland. It started as a pretty uneventful match which was evenly balanced with Catherine just going ahead towards the half way stage. The wind started to pick up a bit and the clouds moved in. We had rink side advertising hoardings being blown across the rinks followed by the most incredible downpour which resulted in play being suspended for about 40 minutes. I have never seen rain like it, at one stage we couldn't see the other end of the rink as it was so heavy. We all got soaked. Incredibly the greens, despite being severely flooded, drained very quickly and we were back on playing soon after the rain stopped. Unfortunately for Catherine the rain delay affected her game and she failed to take advantage of her initial lead and Colleen went on to dominate the second half coming out with a 21 - 13 win.

After a session break and an attempt to dry off, I was back out for the final session of the day as a "Paddle Holder" on green 4. Paddle holders are basically on the rinks to show the shots during the ends of team games. I was allocated an interesting a closely fought game between Canada and Guernsey in the Men's Triples.

With a late finish of around 9:30pm and still a little soggy from the morning drenching, it was back to our accommodation to dry off. We are provided with a lunch ticket if we are working certain in the morning and a dinner ticket if working in the afternoon, unfortunately all we are provided with is a sandwich or a roll!! Our next door neighbour invited us for a snack when we got back which was a welcome gesture. He had cooked an amazing curry dish and 5 of us enjoyed his cuisine over a glass of red. 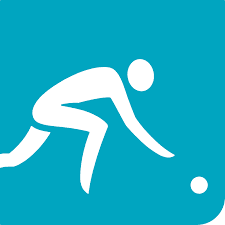