Wednesday 4th April marked the official start of the XXI Commonwealth Games in Gold Coast.
For us ITO's it was a bit of a lazy day in preparation for the opening ceremony in the evening.
We did have some jobs to do at the venue and we made out way down from our accommodation for around 10:30. There were a few questions from the ITO meeting that needed answering and a clarification of a World Bowls ITO Procedure, so we all met up and had a meeting.

Once that was out the way we had a final check of some of the equipment and then the day was ours.
After lunch in our favourite cafe we relaxed with a couple of small beers and a good old chat.

Many of us have not received our full uniforms, either working uniform of the form dress for the opening ceremony. There had been a glitch at the suppliers and delays in obtaining the working uniform were inevitably going to cause problems on our first working day.
Whilst not required, it is nice to be able to dress up for the opening ceremony but we were unable to and instead most of us wore our casual wear.

We met back at the venue at 5 pm to collect our tickets and a snack voucher. It was then a short walk to the Media Transport Mall to catch the bus to take us to the Carrara Stadium. After security checks we made our way to our seats. All Technical Officials were located in one stand so it was a good time to meet other sport officials. Our snack was a bit disappointing, a few crackers and cheese and a chocolate brownie - good job we opted for a cooked lunch!

There was some entertainment in the stadium in the run up to the official programme start and just before the start the heavens opened and we had a torrential downpour. Our plastic ponchos barely coped with the onslaught but on the whole we did manage to stay reasonably dry. Ironically the rain stopped just as the countdown reached zero and the show started. 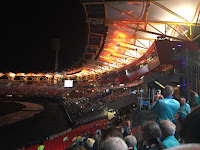 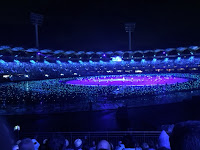 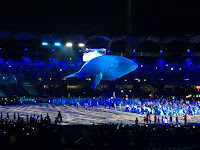 Opening Ceremonies generally follow the same pattern each games and this was no exception. The show was enjoyable but it is always great to see the athletes parade into the arena - it's also a real geography lesson. The official part of the opening of the games sees the raising of the flags, the reading of the Queens message and the athletes oath. This year the sport of Lawn Bowls was honoured with the great Australian Karen Murphy reciting the oath together with member of the workforce and a Technical Official.

The Queen has handed to the duties of opening the game to the Prince of Wales and he delivered the Queens message to the millions watching. The message is delivered in the Queens Baton which had visited all of the Commonwealth countries in a 388 day journey.

After the ceremony we had to battle through the crowds to return to the coach park, unfortunately we were directed to the wrong place and had to battle our way back which split our group up. It was all a bit chaotic but eventually we were returned to the Broadbeach drop off point to walk back to our accommodation. as we only had a snack a few of us stopped at Macdonalds for a quick burger.

It was a late night and we had a 6:30 am alarm call ready for the first day of competition at the Lawn Bowls event.
Posted by Allan at 07:07