The lawn bowls competition at Gold Coast 2018 is hotting up both on and off the rinks as the games continue through Friday and Saturday.

On Friday I had two umpiring sessions back to back on green 2. The temperature increased during the day and copious amounts of suncream was doing little to prevent red legs developing.
The crowds have been increasing gradually with Saturday seeing an almost sell out crowd of over 2500 enthusiastic supporters.
Meanwhile, back home in Blighty it would appear that the tension is rising with our beloved national broadcaster for the lack of bowls coverage during the games broadcasts. Fans are taking to social media to vent their frustrations, various phone numbers and email links to people in power at Aunty Beeb are being posted and complaints submitted. It is a real shame as these games are showing the very best of this sport with young talent on therinks and enthusiastic celebratory crowds in the stands.

The business end of the Mens Triples and Ladies Singles culminated in the finals on Sunday.

In the men’s triples the gold medal match was contested by Scotland and Australia and in a tight battle Scotland were triumphant. The tiny island of Norfolk Islands took the Bronze medal from Canada.

In the ladies singles, there was a shock exit for Australia’s Karen Murphyin the quarter finals, Karen has consistently represented her country in medal matches in both commonwealth and world championships. She was beaten by Colleen Piketh of South Africa who then proceeded to beat Canada to take the bronze medal. The gold medal was taken by Jo Edwards of New Zealand with Wales’s Laura Daniels taking the silver.


On Sunday the English ITOs had a free day and so we rented a car and took a trip into the stunning Springbrook National Park. We followed this by a visit to one of the finest bowls complexes in the country, Tweed Heads. It is sinply vast with 4 outdoor greens and an indoor green plus 4 restaurants and numerous lounges and gaming areas. We had an incredible meal at the club before returning refreshed for another day of action on Monday. 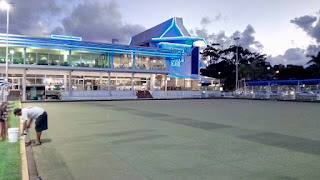