After a great nights sleep we are now fully refreshed and familiar with the timezone we find ourselves in.
Our second day on the Gold Coast and today we had a meeting at the venue and our first look inside the impressive site.
The ITO meeting was an opportunity to discuss the operational aspects of our role at these specific games. We all received a very nice welcome bag containing some merchandise, we also received our Technical Officials medal which all TOs in the games receive and a certificate.
There are some ITO's attending their first games and all are excited to get going. There were the inevitable questions about the finer details. 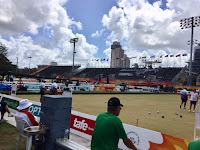 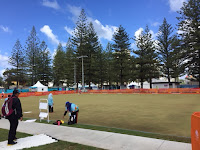 After the meeting we took a familiarisation tour of the venue including the umpires kits and the ITO lounge where we would be based for the next 10 days. There are 4 competition greens which look superb. 2 rinks are dedicated to TV broadcast. It is certainly an impressive complex and we are all looking forward to working there.

There are 4 sessions per day on most days and we received our initial rota of duties which have been shared out equally and fairly.
There are 5 types of duties:

Our first sessions start at 8:45am on Thursday. I will be umpiring on green 4 and then straight on to Mark a singles tie on rink 12. We all have a day off and mine is Sunday.

After the tour it was time for a bit of lunch which we had at a local cafe. Ray, Angie, Dan and I then traveled down to Burleigh Heads to collect some Bowls Shoes from Aero. Initially we were going to attempt public transport as our accreditation gives us free travel. Unfortunately we couldn't figure it out so we called a taxi instead. On the way back we got stuck in some heavy traffic due to the Queens Baton Relay coming through Broadbeach. We opted to jump out of the taxi and walk the rest and it gave us the opportunity to see the Baton come past.
The Queens Baton travels to all the commonwealth nations and contains the Queens opening ceremony speech and her message to the commonwealth. It is a true honour to carry the Baton.

After a couple of beers back at the Cafe we ventured out for some dinner.

Wednesday is the official start of the games with the Opening Ceremony in the evening which we will all be attending hopefully in our dress uniform if it arrives in time.